What is the Difference Between an Employee and an Independent Contractor? 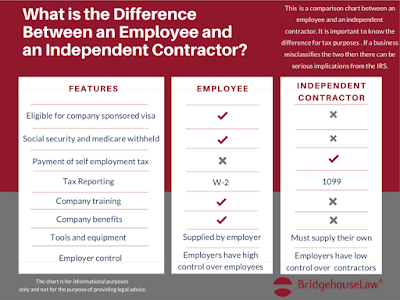 What is the Difference Between an Employee and an Independent Contractor?

Knowing the difference between an employee and an independent contractor is not always easy. But employers must know the difference in order to have appropriate liability protection and to be compliant with labor and tax laws.

Some of those factors include:

All of these things are considered when looking into the relationship between a worker and an employer. If you think designating a worker as an independent contractor will allow you to avoid paying payroll taxes, you may want to think again. The IRS is extremely rigorous when it comes to this topic and there are financial and legal repercussions if an employee is misclassified.

Not all employers misclassify their employees on purpose, but the mistake can be costly. In order for employers to avoid this, they can use a Form SS-8 to help evaluate the type of relationship they have with their workers. The Form 8919 and Form SS-8 can both be found on the IRS website.

Since the IRS makes resources available to better understand how to classify the relationship between employers and workers, there is low tolerance for misclassification.  Make sure that you understand the difference because the penalties, which can include prison time, are not worth it.

*This blog is for informational purposes only and not for the purpose of providing legal advice.

How Small to Medium-Sized Enterprises will Benefit from the USMCA

What is a Registered Agent?