A possible threat for ObamaCare: the subsidy lawsuits

November 15, 2013
The Patient Protection and Affordable Care Act (PPACA), commonly called “ObamaCare”, has been plagued by several problems so far. The latest debacle was the website that was not ready; the next crisis could be lawsuits filed against the laws subsidies. By 2014, Americans will be required to have health insurance either by buying a policy through a health insurance marketplace or by enrolling in other subsidy programs.
The subsidies are a key element of the ObamaCare because many people could not afford private health insurance without it. Only eligible individuals receive cost assistance via tax credits or similar benefits in order to be able to afford healthcare in accordance with the PPACA. Americans making under 400% of the federal poverty level (FPL) can get a type of subsidy, depending on their individual percentage of the FPL. Medicaid is an existing health program in the United States and is also part of the ObamaCare subsidies. An expansion of the Medicaid eligibility in 2014 is part of the healthcare reform and shall be granted to people with an income up to 138% of the poverty line.
According to Article 1 Section 8 of the U.S. Consitution, the Congress shall have power to lay and collect taxes, duties, imposts and excises. Therefore, subsidies in the form of tax credits are up to the Congress to impose. According to the Obamacare law, subsidies shall be granted through an exchange established by the state, not through one set up by the federal government. In its latest decision NFIB v. Sebelius (2012), the Supreme Court upheld the individual mandate to buy health insurance as a constitutional exercise of Congress’s taxing power. They also agreed that the states are not required to participate in the new Medicaid program. Thus, many U.S. states have chosen to reject the expansion of Medicaid and declined to establish their own marketplaces with the result that individuals are not able to qualify for the program. 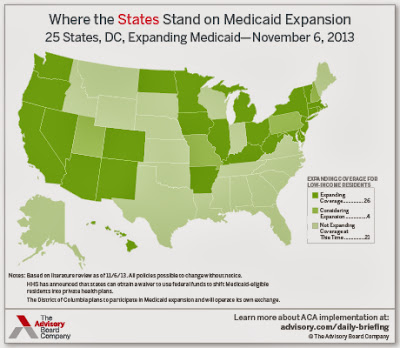 Several lawsuits were filed calling the ObamaCare subsidies unlawful. This imposes a huge threat to the whole ObamaCare program being unconstitutional. First of all, parties argue that it would not be fair to prevent only a part of the population from obtaining specific subsidies. This would force many people to either purchase the insurance or to pay a penalty instead. Furthermore, it is a question of legislative competence. Obamacare prevents the government from enforcing the federal law in those states that decided not to establish their own marketplaces. However, there is another provision that allows the federal government to set up its own marketplace in the states that opt out. Attorneys from the government stated that the “Congress made clear that an exchange established by the federal government stands in the shoes of the exchange that a state chooses not to establish.” This is a way of interpreting and skirting the existing law in order to provide tax credits for eligible individuals in every state. As a matter of fact, the federal government interferes with the state law and it’s decisions. What is the sense of having states opt out if the government will provide tax credits anyways? After the above-named decision of the U.S. Supreme Court that upheld the whole program, it seems like nothing will get in the way of Obamacare. A lawsuit against the circumvention of the law and a contempt of the separation between state and federal law could endanger the whole Obamacare program.
Author: Anja Rettig Legal Intern at BridgehouseLaw Charlotte
Best regards
und viele Grüße aus Charlotte
Reinhard von Hennigs
www.bridgehouse.law