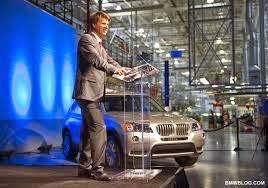 With the expansion, BMW will increase its auto assembly capacity by 50 percent to 450,000 per year by the end of 2016 and add a new model: a crossover X7.
The new jobs will bring the plant to 8,800 jobs. The operation, off Interstate 85 at Greer, began production 20 years ago and has assembled 2.5 million Beemers since 1994. “This expansion means Spartanburg will have the largest production capacity of any plant in our global production network,” says Norbert Reithofer, chairman of the BMW Group’s board of management.
About 70 percent of the X3 through X6 models made in the huge facility are exported to customers
around the world. The value of last year’s exports, mostly through the Charleston, S.C., port, was $7.5 billion, Reithofer says.
It’s the fifth expansion at the facility, notes Manfred Erlacher, CEO of the plant. “The increase in annual capacity, the number of models produced, and the number of jobs on site, reinforce the major role BMW is playing in the region’s economic vitality through technological innovation, environmental stewardship, and development of a highly skilled work force,” Erlacher says in a press release about the expansion.
Best regards
und viele Grüße aus Charlotte
Reinhard von Hennigs
www.bridgehouse.law