Immigration is a good thing

March 4, 2014
This week, the Charlotte Chamber – among over 600 other businesses and business advocacy groups – was urging House Speaker, John Boehner, to make the immigration reform happen. 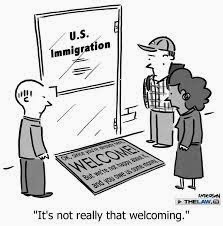 Immigration is always good for business. Bob Morgan, the Charlotte Chamber President, said that nobody should force the 12 to 13 million illegal immigrants to leave than rather to find a way to make them legal. Immigration is a key way to keep the population and economy growing, that’s why borders should be open to use the immigration flow as an advantage, hence the U.S. is a very attractive place to live for many people all over the world.
Furthermore, the immigrants are not only good workforce and labor, but also consumers which again is good for the business. A reform of the immigration system would be great for the economy and national interests.
In the signed letter the businesses stated that a “Failure to act is not an option” in this matter.
To sum it all up, an immigration reform is essential for the jobs agenda and economic growth by adding talent, innovation, investment, products, businesses, jobs, and dynamism to our economy.
Best regards
und viele Grüße aus Charlotte
Reinhard von Hennigs
www.bridgehouse.law