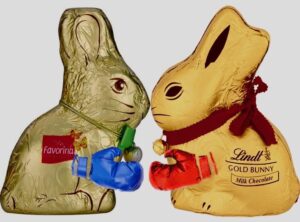 The Federal Supreme Court’s decision is the result of litigation between Lidl and the Swiss chocolate company Lindt & Spruengli (usually just called “Lindt”), which began in 2018 when Lindt filed a petition against Lidl in the Commercial Court of Aargau. The source of the dispute is one of Lindt’s most famous products, a chocolate bunny wrapped in gold foil, which was invented in 1952. Lindt produces 170 million chocolate bunnies per year, which are sold in more than 60 countries. When Lidl also began to sell Easter bunnies wrapped in gold foil, resembling the Lindt bunnies, the dispute arose.

The Federal Supreme Court found that the bunnies of the two producers were confusable for potential clients and that the form and shape of Lidl’s bunnies are comparable to that of Lindt’s bunnies. The Federal Supreme Court reasoned that Lidl bunnies were indistinguishable from the Lindt bunnies in the public’s mind because of the overall impression, despite existing differences in their outer appearance.

According to Lidl, the corporation currently has no chocolate bunnies in stock since it is a seasonal item only sold around. So, in actuality, no bunny needs to be destroyed or converted, and no bunnycide is necessary.

The Federal Supreme Court returned the case to a lower court for an assessment of whether Lidl is also obligated to pay monetary compensation to Lindt.

The Federal Supreme Court’s decision in favor of trademark protection has “great importance for the Swiss market,” according to a Lindt representative.

On the other hand, Lidl is not satisfied with the Federal Supreme Court’s decision. Lidl has opted not to comment on the verdict based on the fact that the litigation has not yet been concluded.

Mariah Carey: The Queen of Christmas?