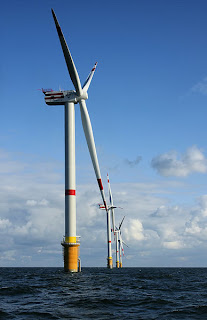 The Charlotte Business Journal reports that while significant offshore wind projects along the Atlantic are still years away, the Carolinas in particular have been building a strong supply chain for the land-based wind power industry over the past years. This supply chain should give them a heads-up when offshore wind takes off.

Wind industry companies with a presence in North Carolina include Nucor Corp., PPG Industries Inc., Duke Energy Renewables, and the ABB Group. The China Ming Yang Power Group, a leading wind turbine manufacturer in China that is publicly traded on the New York Stock Exchange, just opened an R&D center for offshore wind turbines on the Centennial Campus of North Carolina State University in Raleigh. Locating their R&D center in North Carolina was a natural choice.

Jim Lanard, president of the Washington-based Offshore Wind Development Coalition, noted at the Southeastern Coastal Wind Conference in Charlotte last week that the regional effort by Southeastern states is a smart move and a lot more efficient than having individual states compete amongst themselves. North Carolina Commerce Secretary Keith Crisco agreed and suggested that the Carolinas, Virginia, and Georgia pool resources and share revenue.

Let’s hope these excellent plans don’t turn out to be nothing but hot air.