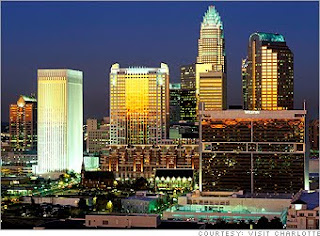 Thinking about moving to the Southern part of the United States? Whether you want to do so for business purposes and/or personal reasons, Charlotte, North Carolina is a place you should seriously consider as the following excerpt of an article in the Charlotte Observer shows.

The Charlotte area’s population surged in the past decade, despite a long manufacturing-sector decline and the financial crisis that battered its economy, new data from the U.S. Census Bureau show.

Transplants looking for better jobs, cheaper homes and warmer weather fueled the growth. And while some worry those newcomers are stretching the job market and community resources nearly to their limits, others say the influx signals a brighter economic future.

“Population growth is good for business,” said Vanessa Goeschl, vice president of research at the Charlotte Regional Partnership, which promotes growth and economic development. “It allows us to market a stable and growing workforce, it gives us diversity in the workforce, it shows companies that people are moving here. … So all of this is a huge boost.”

North Carolina was the fastest-growing state in the Southeast and one of the fastest-growing in the country, ending 2010 as the 10th most populous state. That continued a pattern of double-digit N.C. growth each decade in the past century, the census data show.

“We’ve been in a deep economic downturn, and although things seem really bad in North Carolina, things are far better than in many other places,” said Jim Johnson Jr., a business professor at UNC Chapel Hill who studies the state’s demographics.

Some transplants move to care for their aging parents; others have sought economic refuge in a state that has historically offered better job prospects, he said. Urban areas such as Charlotte, which attracted legions of finance workers in recent years, have led that growth, while suburbs with the best amenities – lakes, the coast or the mountains – have also seen big spikes.

Please contact the International Practice Group of Byrne, Davis & Hicks, P.C. if you need any assistance with getting your international business and/or personal life started in Charlotte. Our Charlotte office is conveniently located in the center of Charlotte’s Uptown district near the intersection of Trade and Tryon Street.