1. “Heal the world”?
On January 1, 2023 the German “Lieferkettensorgfaltspflichtengesetz (LksG)”, Act on Corporate Due Diligence Obligations in Supply Chains will come into force. This will mark a milestone within the EU to fight slave-like working conditions and vice versa to protect human rights worldwide.
According to the German Federal Ministry for Economic Cooperation and Development, globally 79 million children suffer from exploitative working conditions and 25 million children provide 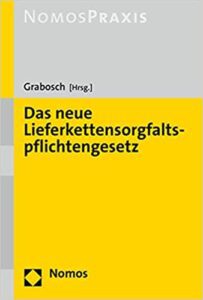 forced labor. Since the appeal by the German government to incorporate due diligence instruments on a voluntary basis was largely unsuccessful, the legislature now makes its former suggestions mandatory.
The goal of the LksG is to require the companies that trade and sell goods produced in other nations to run background checks on their suppliers in order to prevent European wealth based on exploitation.

2. Structure
a. Companies that must adhere to the LksG
The LksG will initially apply only to companies that employ globally at least 3,000 people on a regular basis. Companies that have either their principal place of business, their branch office, their administration, or their registered office in Germany must abide by the LksG. Companies that have at least a branch office pursuant to Section 13d German Commercial Law Code in Germany must comply as long as their 3,000 employees are employed in Germany.
b. Definitions
According to Section 3 of the LksG, companies must adhere to due diligence obligations in an “appropriate manner” to minimize risks regarding human rights and environmental violations. Section 2 lists and clarifies the risks that the LksG aims to mitigate, referencing various international agreements. Central aspects of human rights protections in the LksG include:
(1) Prohibition of forced and slave labor and slavery;
(2) Employee rights, including occupational and safety as well as organizational and trade union rights;
(3) Prohibition of discrimination and unequal treatment; and
(4) Compliance with environmental standards and other environmental rights.
Environment-related aspects of the LksG aim to conserve the location of production as a habitat for the local population by reducing pollution. As such, the LksG uses the nexus of the environmental right to further its central goal: human rights protection.
There is a presumption that the risk for human rights, as defined in the LksG, is present if certain threshold facts exist that increase the likelihood of a violation. For instance, if there is evidence of employment of children, compulsory labor or worker’s protection rules at the workplace.
c. Duties and Consequences
(1) Risk Analysis and Management
The first step for each company will be to implement compliance measures to evaluate the likelihood of the event, that risk as defined in Section 2 of the LksG exists within the supply chain. After this evaluation, a detailed plan outlining concrete measures to minimize risks must be created. The third step includes the implementation and thus, preventive measures for the future as well as actions to rectify already existing infringements.
(2) Compliance Mechanisms
First, companies themselves have the duty to assess the effectiveness of their risk prevention on an annual basis. Consequently, they have to publish on their website a report on their efforts to minimize human rights violations within their supply chain. Public opinion is considered equally important to company management as economic risks through fines. Second, companies are required to establish a complaint process to report violations of human rights or lack of compliance with the environmental protection rules. Third, section 11 grants third parties, such as NGOs, the ability to file complaints for those who suffer due to the company’s insufficient practices. This should put an early end to corporate secrecy due to the investigatory practices of NGOs.
Fourth, there are specialized authorities to investigate and evaluate on a regular basis whether all the measures required by the LksG have been implemented.
(3) Liability of Companies and Suppliers
Of course, companies will not be liable for any violation of human rights on this planet. Companies will only be responsible for what they can control within their supply chain. The supply chain consists of all products and services a company offers and includes any step that is necessary to produce any product or provide a service. Therefore any act of a direct or indirect supplier is ascribed to the obligated companies. Misconduct by either the company or by a supplier can have severe consequences: Primarily, companies that lack their own motivation to comply must pay fines up to two percent of the company’s annual worldwide revenue. Further, an infringement can lead to the company becoming ineligible for public contracts in the future. The degree of liability is dependent on both the chance of knowing about the infringement and the opportunity to rectify the infringement. In this evaluation, the differentiation between direct and indirect suppliers is relevant. There is little to no chance of escaping liability if the respective supplier is active in a region or profession where human rights or environmental risks are common.
It is impossible to prevent any violation from happening and minimize any risk to zero due to the reliance on third-party actors. The liability therefore is excluded if the obligor company has acted in accordance with the LksG.

3. What to Expect
In February 2022, the European Commission accepted an official recommendation by the European Parliament to issue a guideline with even further requirements. Thus, a unified EU regulation is likely to come sooner rather than later. As soon as January 1, 2024, the current act in force will apply to companies with not 3,000, but 1,000 employees.