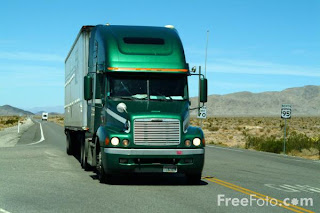 Officials from the United States and Mexico signed an agreement this past Wednesday that will open up each country’s highways to trucks from its neighbor. The agreement represents the overdue implementation of a provision of the North American Free Trade Agreement (NAFTA) that was signed nearly two decades ago.

The original NAFTA agreement called for Mexican trucks to have access to highways in border states by 1995, which would be expanded to all U.S. highways by January 2000. In contrast, Canadian trucks have no limits or restrictions on where they can travel in the U.S. Despite the requirements of NAFTA, Mexican trucks have been mostly restricted to a 25 mile from the border buffer zone. Mexico has reacted to this limitation by imposing trade tariffs on numerous U.S. goods. They have agreed to immediately cut those tariffs in half, and to eliminate them all together once the first Mexican hauler begins traveling on U.S. roads. This is expected to be sometime in August.

Many farmers are praising the legislation and expect to see a big jump in demand from Mexico for American farm products, especially meat and fruit. However, everyone was not happy about the agreement.

Teamsters General President Jim Hoffa condemned it, saying it “lowers wages and robs jobs from hardworking American truck drivers and warehouse workers.” In addition to the concern about jobs, the safety of Mexican trucks and the ability of their drivers had held up the agreement for a long time.

The Trade department hopes those fears will be assuaged by the implementation of strict safety requirements for the trucks and their drivers. Mexican trucks will be required to carry electronic monitoring devices to ensure they make only cross-border, and not domestic, runs and to make sure they are in compliance with U.S. hours of service laws. Mexican truck drivers wanting to operate in the U.S. must also pass English-language proficiency, drug, and safety tests.