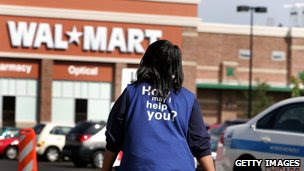 We previously reported on our blog about the potential class-action sex discrimination lawsuit the corporate giant Wal-Mart is facing. On Tuesday, March 29, the U.S. Supreme Court started to hear oral arguments on whether the largest class-action employment lawsuit in U.S. history can move forward against retail giant Wal-Mart.

The world’s largest retailer as well as nation’s largest private employer is accused to have discriminated against female employees for years. Up to 1.6 million plaintiffs could be participating in the class-action suit if it goes forward.

Plaintiff lawyer Joseph Sellers stated that there is a “corporate culture” at Wal-Mart where women are treated as second-class employees. The corporate structure also strengthens this “gender stereotyping and discrimination,” according to Sellers.

Wal-Mart representative Gisel Ruiz, however, says that such discrimination has never happened to her. She started small and had a great career development and is now executive vice-president for human resources. Wal-Mart has anti-discrimination campaigns even in individual stores and people are held responsible if they do not follow their rules.

Appellate lawyer, Theodore Boutrous, says “the plaintiff lawyers in this case went way too far. There is no way one woman can be representative of a million in a case like this.” The consequences of such a judgment would be unforeseeable for American companies. Class actions could be filed without reasonable reasons which would endanger certain companies.

In contrast, plaintiff’s lawyers agree to some extent that there is an exception for a class action lawsuit if “the company is sufficiently large and the discrimination is sufficiently widespread and it is therefore impractical to handle the issue on a case-by-case basis.” Plaintiff lawyer Joseph Seller noted that “there is no large-company exception to civil rights claims in this country!”

Supreme Court Justice Antonio Scalia added to the excitement on the first day of oral arguments in Dukes vs. Wal-Mart, Inc. by getting into a small fender-bender on his way to the Court. According to the Washington Post, Justice Scalia rear-ended another car that set in motion an accident that ulitmately affected four cars. He was fined $90 which he may contest in court if the justice so chooses. It is extremely rare for justices to show up late to a public session, and Justice Scalia did not disappoint by sitting behind the bench when oral arguments began at 10 a.m. sharp.

The Supreme Court is expected to make a ruling by the end of June on whether the class action can proceed. Whatever the justices decide, the ruling is expected to have a long-term impact on business litigation.